Sorry for the lack of posts lately

Job hunting is a bitch

...The guy won't stop. I think he's starting to stalk ME now to get to Paul

Advice, anyone? Calling the police is out of the question as they would laugh at the description (especially after Paul's last escapade...)
Posted by Akinil at 1:56 pm No comments:

Why do you delay?

your time wasting is wearing on my patience. you know wHat to find, yoU idiots. why do you delay?

wasting eveRybodies time. ouR time is precious and cannot be sucked dry by Your shenANigans! Do stop your FoolIsh eNDeavors!

THis is quitE important. the GoAl is in sighT, and you kEep letting it draw closer.

also, your password was easy to guess. i11u50r14? really? i am disappointed.

Paul got the wrong guy. The guy WAS targeting Paul, don't get me wrong. It's why Paul isn't in jail. But... he only chose Paul that day

How do I know this?

Paul came over roughed up, but smiling

He kicked the guy's ass this time. Good for him!

Something is bothering me though

He did this in the park ten minutes away

Five minutes before he came I saw a tall, bald man in a suit across the street. Only a glimpse though, so I didn't see his face 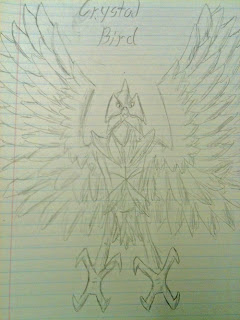 Well, here is number 3 on the list, the Crystal Bird (With a spiffy redesign to boot!)


Notable Features:
-Produces Oz naturally
-One of the few organisms able to handle large amounts of unfiltered Oz
-Very aggressive
-Attacks in groups
-Tends to have a few morphed leaders
-Highly territorial
-Able to cool the air around its feathers
-Weak, but quite swift and capable of teamwork

Behaviour: Violent and territorial. However, they will usually let one go through unscathed provided they stick to trails.

My favourite Cryscon and the second species I came up with (All the way back in Grade 5), the Crystal Bird is THE flagship Cryscon. It has received an overhaul for this occasion (the old version was... Let's just say that no art skill was needed. Only a ruler), and I'd say it was long overdue

Despite being among the weakest of Cryscon, not only are they capable of massive damage when in a group, they are able to morph into a Tier 1 Cryscon (Tier 1 Cryscon are creatures with enough power to rewrite reality itself - It is the only one of four that isn't a deity class). However, the restrictions to get the powerhouse are fairly nuts, requiring that you first pay 2000 Oz (a fifth of your starting amount!) and discarding a legendary oz crystal card to morph it into a Golden Crystal Bird which burns your Oz at 200 a round (a round being yours and your opponents turn together) just to keep it on the field. You then need to morph this into The Legendary Phoenix of Oz...

...Which is just as weak as a normal Crystal Bird. This requires a last step: You need to activate the Legendary Tome of Oz, which lets you activate the Crown of Oz (Removes all Oz requirements needed to attack with this creature), the Deliverance of Oz (The only attack modified by the Claw of Oz), the Claw of Oz (Gives infinite attack power to the Deliverance of Oz), and the Fortress of Oz (Gives the Phoenix infinite health). So while the creature itself is untouchable, these cards are completely unprotected, so you need to use a lot of items to keep your opponent from using an item or effect to destroy them (every Tier 1 card has some sort of glaring flaw - One glaring flaw is sheer strength - When a creature is destroyed, you lose Oz equal to the Maximum HP on the card. To attack, you pay Oz equal to half the attacks power, rounded up to the nearest 10. So if you use a 500 power attack on a creature with 50 health, your opponent loses 50 Oz and you lose 250! As such, a balance of weak and strong creatures is needed)

Anyways, the Crystal Bird is the flagship Cryscon, and my absolute favourite. I hope it ends up as one of the favourites of fans when the game is fully made and released

Next time I do a bestiary, I will feature my second favourite Cryscon, the Crysilk (said like Cri, not Cry)

EDIT: Holy crap that is faded. I'll replace the picture once I have a version with darker lines
Posted by Akinil at 8:56 pm 1 comment:

I said the next post should be a Bestiary, but this is urgent

Paul left about an hour after the post earlier

...And came back in after 30 minutes,looking beaten and bruised

After a while, I coaxed the story out of him. Turns out the stalker was waiting for him

Now, there is something you should know about Paul:

He is hot headed and takes his problems head on

He apparently confronted the guy and when he wouldn't answer, he started to attack the guy, only to get the crap beaten out of him

Paul again. HELL that guy was tough! And I know what you're going to say, "A tall bald man in a business suit beat you up and wouldn't speak!? Hah! Slenderman! I knew it!". You'd be wrong. And a jackass. A big, wrong jackass. After all, the guy had a face. Blue eyes, a crooked nose, and a perverted little smile that I wanted to wipe off his face so badly.

Weird thing is, when he was beating me, it did look like his face... How do I put it... Blurred. Like if it was an illusion.

You took the keyboard from me to make THAT lame pun!?

...I hate you sometimes. Anyways, the guy was fast, strong, and next time he'll get a face full of my knife! This baby has a silver hilt and an iron blade. Let's see him shrug THAT off!

$20 says he kicks the crap out of you again

Now, where was I? Oh yes, talking about how I'll kill the guy next time.

See what I mean? Hot headed

If you're curious, some of that dialogue was transcribed as we argued. I wanted you guys to know what Paul is like. Sadly, he took out the part about strangling me with my own intestines if I didn't stop transcribing :( Oh well

Next time, I'll show you a new creature

Paul is over and he wants to make a post

He says he needs it here, and can't make his own blog

Thank you for that intro, Eric. Really nice.

I will use bold for any posts I make when borrowing Eric's account. Now... Where do I start? How about I start with the man who keeps stalking me? That seems like a fucking good idea!

Every god damn day I see a tall man in a suit just watching me. He steps behind a tree or building whenever I spot him. At first I thought it was nothing. But the freak has been doing it every god damn day! The bald fucker won't even DARE to show his face!

And I swear to god that I will track down and kill the first fucker who says Slenderman!

Well, if I don't post again in the next week, assume Paul murdered me. Don't try to avenge my death readers, because the death will be worth it

Next post should be another Bestiary. This one will be one of my favourites!